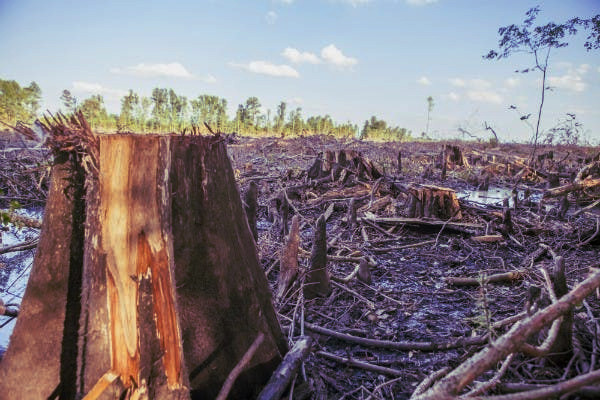 Hundreds of thousands of acres are clearcut every year in the Pacific Northwest.

On February 4, 2021, I visited a recent 80-acre clearcut above the Middle Fork Nooksack River. It was typical of clearcuts in the region. Yarding logs uphill had disturbed most of the forest soil. Lots of bare dirt. Most of the slash had been burned but there was some around along with charred logs and wood. The site had been aerially sprayed with herbicide to kill off all vegetation after which it was planted with a monoculture of Douglas fir with a narrow genetic diversity. There were some fingers of residual vegetation along the riparian corridors of seasonal streams, but no trees of any consequence were left on the 80 acres. This is all perfectly legal of course.

What will happen next will be relatively predictable. There will be an explosion of non-native weeds. Already on the site I see bull thistle, St. John’s wort, yellow dock, horseweed, and butterfly bush. A lot of native plants will germinate in the next few years. Typically the logging company might herbicide the site again after a few years to knock the deciduous vegetation and ground cover back to reduce competition on the Douglas fir. After 7 to 10 years the Douglas fir will close canopy and shade everything else out. Likely this would be followed by a pre-commercial thin and then possibly one commercial thin before the entire stand is clear-cut again. Such are the current forest practices for the most part.

How can we intervene in this process using agroforestry? The best time for intervention is right after the clearcut. Plant a wide diversity of conifer and deciduous species. Include species that will give short-term and medium-term crops. Nature doesn’t like conifer monocultures rotation after rotation. It wants a deciduous soil-building phase. Alder, cottonwood and other species improve site fertility and reduce soil acidity.

Permaculture creates a zone map as part of its planning process.

Zone 1. Most intensive use areas. Around buildings, viewpoints and parking areas. Special attention paid to food plants, color, fragrance, aesthetics. A small part of the landscape.

Zone 2. Areas adjacent to zone 1 and along roadways. Roadways are the access corridors through the landscape and are traveled frequently. Easy to see management needs in a timely fashion. Easiest to harvest area.

Zone 4. Mainly managed for timber. Mostly a hands-off approach. Depending on acreage and labor availability the crop trees can be mechanically freed from competition in the period before canopy closure.

Zone 5. Protected zones. Long-term goal is to allow it to return to old-growth status. Control of exotics where deemed warranted. Focus on native plants.

Recommendations for an Agroforestry Educational Center on the Nooksack River Middle Fork.

Broadcast seed of desired herb seeds in zones 1, 2 and 3.

The above crops can yield short-term income in years 1 to 5. Basically it is wildcrafting.

Most of these can provide income from medicinals, seeds or propagation material. Some of these need to be in the moistest parts of the site with some shade.

Utilize the cut and fill slopes along the roadways for crop and ecological species. Cut banks are some of the hottest and driest spots on the site. Shallow soil, usually subsoil. What species can survive there that are useful? Fill slopes are usually deeper soils, and get extra moisture from the road. Plant a mixture of herbs and shrubs.

Rock outcroppings. What species to use above, below and to the sides. Oftentimes the area below the outcropping is one of the most favorable in the landscape. The rocks heat up and hold heat so are one of the warmest sites in the landscape. Soils and water tend to accumulate below and to the sides of the outcropping. The cap soils above the rock outcroppings are some of the shallowest and driest parts of the landscape. Special plants can be grown here that wouldn’t be able to compete in areas with deeper soils. I think here of plants like kinnikinnik, which can trail downwards over the rocks. Rhodiola rosea, Sedum spathulatum and other succulents can be used. Shrubs, small trees and vines can be grown below the outcroppings. Vines can be trained on the rock face. Grapes for instance would work well in these niches.

Hugelkulturs should be built using any slash accessible to zones 1 and 2. Look for micro-sites to build them. Depressions where water tends to accumulate. Great places to incorporate charred woody biomass on site. This becomes biochar when incorporated into the soil. Hugelkultures can be built by hand or using an excavator. Usually they are built on contour. An excavator will be much faster of course and enable larger size hugels. The brush is piled up and covered with whatever soil is available, including subsoil. Amendments can be added to hugels in zone 1 and in zone 2 where best possible growth is wanted. But any hugel will age over time to a fertile mound which stores winter precipitation for the dry season. Hugelkulturs should be planted to high-value crops as they will be the most productive growing spots on the site. This can include vegetables, medicinals as well as berries and shrubs.

Some clearcuts end up with massive amounts of slash. Sometimes piled and sometimes not. Burning slash is common. Using slash in hugels turns it into long-term fertility and water storage.

Do your research. Do extensive research on hugelkulturs before building them. Visit existing hugelkulturs, preferably well-managed ones, Have your seeds and planting stock ready to plant as soon as constructed or shortly afterwards.

My Youtube channel has a series of 6 videos on some of my hugelkulturs. Scroll down to see the hugelkultur playlist. https://www.youtube.com/channel/UCG4uqbuuwBGAgC02SHLTnXg

Some shrubs to use on site:

The edge between the existing forest and the clearcut. One edge is where the 29-year old, Douglas fir plantation abuts the clearcut. There are species which can be planted just inside the forest edge which will be partially shaded yet have sun coming in from the side. There is another set of species which likes being out in the open but appreciates the sheltering affect of the forest. These are very narrow bands of microclimates. Have an access pathway that follows this zone. You might maintain this as a linear opening in the forest over time. In other words don’t let trees grow here. Easier said then done. How much labor is there to plant, harvest and maintain this habitat niche?

The canopy will grow higher and denser as time goes on wherever management does not restrict tall trees. As the canopy develops a diversity of understory crops can be planted. The goal is a forest with many different canopy densities. Keeping full sun openings along the roads and zone 1 areas. Light shade in some areas. Medium shade, etc. Most of the site will go to full shade over time. Early thinning can keep the stand more open. Plant more diverse species of trees in gaps left by Douglas fir dying. Start the species diversification early on and keep adding to biodiversity over time. See the book Farming the Woods by Ken Mudge and Steve Gabriel for farming the understory.

Coppicing. This can produce a wide variety of small wood for sale and for crafts. Products can include medicinal barks, basketry-making material, rustic furniture and bodging material. See resources on coppicing and coppice craft. Ben Law in the UK has several books out. Willow, cascara, red osier dogwood, hazel and many other shrub and tree species can be coppiced.

Research: Who is doing agroforestry experiments in PNW clearcuts?

Family on the Swinomish Reservation I consulted with.

There most likely are dozens more.

Watch Sepp Holzers videos on the Kramaterhoff in Austria on how to do permaculture and pond systems on steep forested land.

Check on possibilities of seasonal hydro-power on the main streams.

We are all the way to the end of the paved road, right at mailboxes onto dirt road. Then go a few hundred yards, yellow house on left close to the road, just past the field and another driveway. Barn in back.