Hey! Who would like to help get this documentary done in 2017?
Need video shooting, editing, crowd funding and more.
Please contact Michael Pilarski.
We are looking for someone with experience to run a Go Fund Me drive (or other crowd funding) to raise funds to bring Michael Pilarski’s agroforestry experience to the world. A synthesis of what I’ve learned in my 30 years of establishing agroforestry systems at 10 locations in Washington, Montana and Oregon. USDA Zone 5 growing seasons at most places, but some Zone 4 and Zone 6 locations also. The principles work in all climates of the world with the exception of the boreal zone where you don’t want any shade on gardens.
We need:
Spring, 2017 shooting at the Port Townsend plantings.
Spring and summer of 2017, visit all of the existing systems and video them all. Interview the current stewards.
Late summer editing and voice overs, text.
Much footage has already been shot over the last decade at six locations of various age systems from bare dirt to 25 years old.
Following is a list of the 10 agroforestry sites in chronological order of planting and associated videos.
1) Antahkarana Circle Community
Chesaw, WA. Started 1981. No video.
2) Whispering Pine Farm,
Chelan, WA. First plantings began in 1981. I planted a new area when I moved there in 1986. 3 videos. 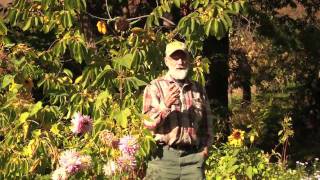 Oct 24, 2010. 14.52 minutes. 7,319 views. By Richard Haard.
In its 28th year at the time of shooting. Fall visit to Whispering Pines farm. It is a homestead based project established 28 years ago as home and settlement for several families who created their own sustainable agroforestry based food production systems. Here we see the results of the 'back to the earth movement' of the 70's by people who stayed engaged with the mission to the present day, offering an intergenerational message from Skeeter to us and our children. 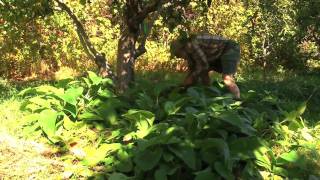 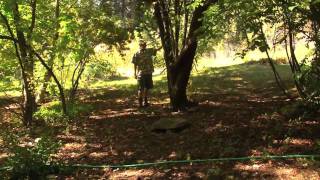 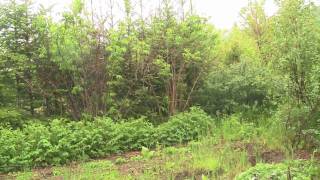 May 31, 2010. 8.52 minutes. 3409 views. By Richard Haard.
Here in this two-part video we visit a project that has been in production for 14 years. The project was started by Skeeter and 5 years ago transferred to a family operating a medicinal herb producing business. It is very interesting to see how plants, exotic and native have adapted into a system unique for climate, soils and farmer. 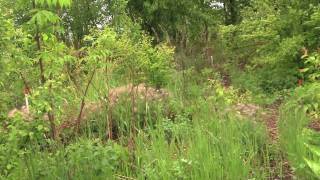 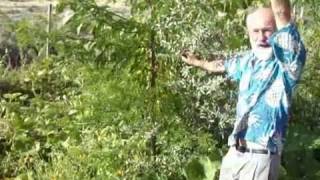 Feb 3, 2011. 8.18 minutes. 40,391 views. by Paul Wheaton.
Michael "Skeeter" Pilarski shows off what he calls "closed canopy gardening" - the idea is to reduce the amount of sun that reaches the soil. You can hardly see the paths. This is an early phase for a food forest or for agro forestry. Already well beyond an organic garden.
Back To the Garden.
Not on Youtube. This 2008, award-winning documentary by Kevin Tomlinson has had many viewers, including many overseas. Michael Pilarski was one of the six people featured in the film. Including a segment at Sunshine Garden in 2008.
6) Okanogan Biodiversity Farm
Tonasket, Washington. Started 2009. 1 acre.  I managed for 5 years.

Getting started in Agroforestry 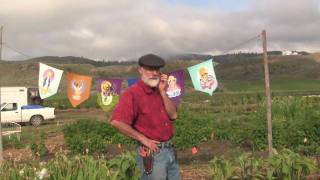 May 29, 2010. 6.44 minutes, 12,004 views. By Richard Haard.
100 crops currently. Okanogan Biodiversity Farm (year 3) plus year one at Leaping Sheep Farm. This is the first of a series about a tour of projects in North Central Washington. Here Skeeter shows us how to get started creating a sustainable food production system that sequesters carbon and recycles nutrients. 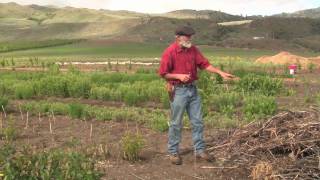 May 29, 2010. 9.55 minutes. 4824 views.
This second video in this series is a continuation of a tour of Agroforestry systems with Michael Pilarski, Skeeter of Friends of the Trees Society. In this video and its sequel we take a tour of Okanogan Biodiversity Farm and discuss the methods used in making one of these systems function as a sustainable production unit. 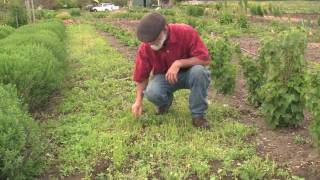 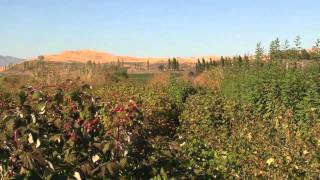 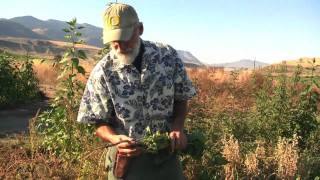 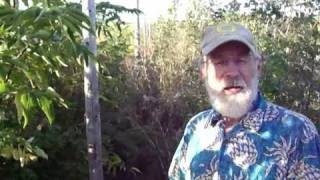 Sep 28, 2011. 14:40 minutes. 61,144 views. by Paul Wheaton.
Fall year 3. Michael Pilarski ("Skeeter") takes us on a tour of his three year old food forest, complete with many species of beneficial weeds. Skeeter is well known as a wildcrafter. This is a 1-acre patch he manages where he grows edibles and medicinals for sale. He also grows soil building plants to support the other plants he is growing. He does a lot of "chop and drop" to build organic matter in the soil. 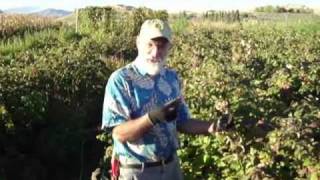 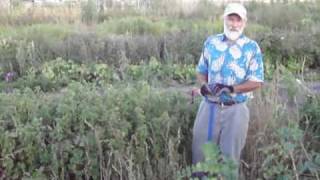 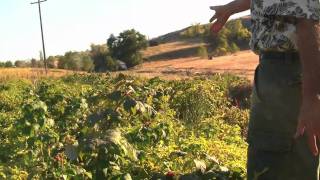 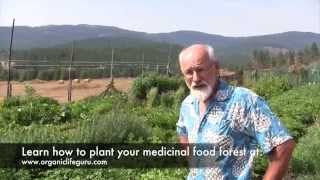 May 10, 2014. 30:47 minutes. 60,706 views.  Subtitles.
How to Grow a Medicinal Food Forest.
https://organiclifeguru.com/course/how-to-grow-a-medicinal-food-forest/
3 hours in 16 sessions. The educational video is available for $45 on Udemy. A well-done, professional video by Chris Badgett of  Organic Life Guru of year one of the Oasis and Food Bank Farm.  Several visits.
The trailer shot at Food Bank Farm is 4:51 minutes.
Agroforestry Tour of the Oasis.
May, 2016. Not up yet. Needs editing. May of year three.
9) Food Bank Farm,
Whitefish, Montana. 1/16 acre.
10) Hardy Kiwifruit farm.
Port Townsend, WA. Started in 2016. ¼ acre. Lots of photos. No video yet.
11) Hugelkultur planting 2017,
Port Hadlock, Washington
This will be planted in the spring of 2017 on a large hugelkultur bermed up in the fall of 2016.
I started farming and gardening in 1972 and have farmed or gardened on 20 sites over the years including these agroforestry plantings. I’ve made lots of mistakes, built on my successes and enjoyed myself thoroughly.  Some people measure their success as how much money and capital they have built up.  Some people measure their success in how much they have been able to serve the world.  If you measure success by how much you have enjoyed your life and enjoy your activities, then my life has been very successful. I love working with plants and the soil and being in nature. I have had a career of successful enjoyment. I was raised in a working class family and was taught to be productive.  My life’s output of food, medicines, seeds and nursery stock feels like right livelihood to me.
Lesson #1.  Establish species-rich plantings right from the start.  The most species I’ve ever had on one site is 200 species in year 9 of my planting at Sunny Pine Farm, Twisp River valley north-central Washington. Generally I plant about 50 species in the first year.  A mix of trees, shrubs, berries, vines, perennials and annuals.  In the long run they will turn into multiple-layer systems with tall, over-story trees, shorter trees, tall shrubs, short shrubs, vines, Herbs, and groundcovers.
Lesson #2. Achieve good production in year one and good production every year thereafter.  My systems are influenced by permaculture, but I don’t call them permaculture.
Lesson #3. Low capitalization. How to do it on a shoestring. $5,000 or less. Low risk.
Lesson #4.  Closed canopy gardening.
Lesson #5. Heavy fertilization (all organic) before planting. Very little fertilization needed in subsequent years.
Lesson #6. Meticulous weeding in year one.
Lesson #7. Start small and work up.
Year one, Almost everything is planted the first year. The annuals will dominate the production. Potatoes, vegetables,  annual herbs, cucurbits, oats, biennial roots which are harvested after one season’s growth, such as burdock, teasel and valerian. There is some seed crop in year one and an occasional handful of berries.
Year two: Lots less room for annual crops but still some.  The perennial herbs get big and leaf harvests ensue in earnest.  Berries give a decent crop. Trees and long term plants get a little bigger. Seed production goes up. Two-year root crops can be harvested in the fall such as elecampane and marshmallow.
Year Three:  Most berry crops are now in big production. Perennial herbs and roots give good yields.  Seed crops are up.  Some trees and shrubs are noticeably starting to provide some windbreak effect.  Very little room left for annual crops in the system. Some area can be left open for a garden.  This is the year that I tolerate more weeds in parts of my system.  Most perennials are well established. I want ground cover in the walkways. Weeds can do some useful functions without reducing yields in parts of the system.  You still need to carefully weed leaf harvest herbs such as lemon balm , hyssop, oregano, etc.
Year Four: Berry crops increase again.  Good perennial production.
Harvest can start on 4-year perennial root crops such as black cohosh and Veronicastrum. As some things are dug up, new plants can go in that disturbed soil.  This is the point where shade-loving, runner plants are introduced to the system.  They now have canopy to grow under.  Some examples would be goldenseal, mayapple, wild ginger, Viola odorata, butterbur (Petasites sp.), coltsfoot.
Year 5. Trees and shrubs take up more room and cast more shade.  Some berries start to reduce production.  Some sun loving perennials also suffer
Year 6-10.  This is the time to transition to tree and shrub crop production. Berries, fruits, flowers, bark, leaves, roots. seeds, nuts. The understory is still producing but it mostly shade tolerant or shade dependent species.  Some things will die naturally, outcompeted. But we will do thinning as well.  Some trees are pruned up.
Year 11 -20. Pruning and thinning are main management tasks (besides harvesting). Biomass is really accumulating on site with live biomass both above and below ground and woody debris from prunings and thinnings can be piled up. The soil becomes very fungal-dominated and a forest floor soil starts to build.  There are still understory yields. Some tree crops fall to the ground of their own accord.  Some trees can be kept pruned and trained short enough to be able to reach with ladders, but some crop ends up out of reach at some point.  We can harvest craft wood and wood for turnery and perhaps some poles and tool handles.  But the real timber doesn’t’ start till year 30 or so.  Cash yields may actually go down in this time period, but management costs are low.  Medicinal bark yields can be high in this period. Substantial bark yields are possible from prunings and thinnings. Tree seed yields will also be increasing in this period.
Year 21-50. Similar to above, but the forest ecosystem becomes taller and heavier in weight.  The soils become forest soils.  Timber yields are starting to come in from oak, walnut, etc.  You’ve got yourself an arboretum at this point.
Some wildcrafting videos with Michael Pilarski. 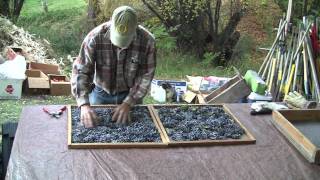 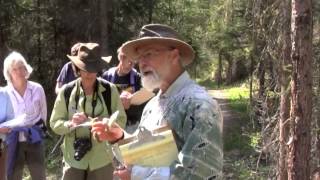 Organic Life Guru.com 14,386 views. 35:05. May 27, 2013.
Michael Pilarski shows you common wild edible plants and medicinal plants. He teaches their medicinal uses, history, and which ones are edible. The wild edibles video was filmed on one of his wild edible plant walks in Whitefish Montana.